The project brings 171 units of affordability to the area for Seniors 55+, near the intersection of Buffalo Road and Sahara Avenue, in District F in Spring Valley Township.

The West Sahara Senior Housing location has easy access to services and amenities. Seniors want, including RTC transportation directly adjacent to the property, retail, medical, pharmacy, banking, and food service within 1/4 mile from the site. And supportive services will be offered on-site, free to residents, coordinated by Silver State Housing, including health and wellness screenings, doctor visits, food distribution, fitness, computer literacy, employment counseling, transportation, and social and educational activities, all on a monthly calendar.

Construction is scheduled to begin in Autumn 2022, with an approximate 18-month delivery. 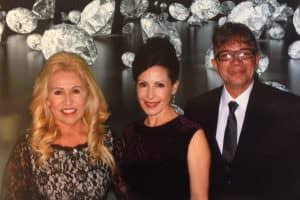 This year’s event, “A Diamond in Disguise”, was held at the Rio All-Suites Hotel and Casino, The event honors the best in various facets of the multi-family industry, including categories such as Leasing Consultant of the Year, Maintenance Supervisor of the year, Community Manager of the Year and Community of the Year. 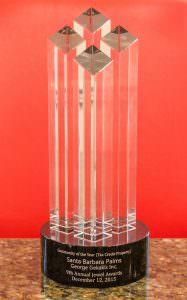 We are proud to announce that this year’s recipient of the Community of the Year Award for the Tax Credit Properties category is Santa Barbara Palms. Lori Muehlhausen accepted the award on behalf of the property.

With all that has been going on in the greater world, sometimes we forget about being grateful for the good things that surround us, or that we are involved with, like working in our affordable housing industry. The opportunity to make a positive difference in the lives of our Seniors or people with very limited means is an extremely rewarding experience. We appreciate the acknowledgement that Santa Barbara Palms has created an environment where people can live a better life!

The Responsibility and The Reward

I love public television, and enjoy a good Masterpiece Mystery or classic drama that gives the opportunity to time travel, sometimes with kings of old, but sometimes in a more recent setting, like Call the Midwife, set in the 1950’s-60’s in the East End of London, based on the memoirs of a real nurse, Jennifer Worth, who helped deliver babies in a poverty-stricken neighborhood. Recently there was an episode that dealt with public housing that caught my attention.

The problems of affordable housing are nothing new, nor specific to our nation. We have all come a long way in providing what is now described as “safe, decent and affordable” housing for that segment of the population in need. The term has its roots in the Great Depression era, delivering a proper living environment with basic sanitation to millions of Americans who were living in tents or shacks or slums. This was an urgent public health cause. Today, the description of decent housing represents a much larger set of expectations.

In the television drama, a young malnourished woman gives birth in the squalor of a tenement. Appalled at the conditions, the attending nurse contacts the housing authority to see what can be done. She explains that it is not enough to provide shelter; the goal must be to provide a way for people to flourish and prosper.

A bit of history: In 1937, the US Congress passed the Housing Act, which created the US Housing Authority, and until 1959, with the creation of the Section 202 program, public housing authorities (PHA’s) had a monopoly on providing affordable housing. Direct loans were made to non-profit developers to assist with housing for the elderly. By the 1980’s, PHA’s became more entrepreneurial, and with the advent of the Low Income Housing Tax Credit (LIHTC) program in 1986, the public and private sectors could form partnerships to deliver the much-needed housing on a grander scale. LIHTC has proven tremendously successful, the program evolving and adapting over the years to include particular housing for handicapped, veterans, substance abuse, mental health, transitional, frail elderly.

And, we have come to understand and acknowledge that a shiny, new apartment in a poor and declining neighborhood is not enough; housing must be inclusive, set in good locations, with access for all, and opportunities for economic and social advancement.

The particular episode of Call the Midwife ends with the inadequate and outmoded housing coming down, and the family in question entering at their new home, their faces radiating joy with hope and gratitude. The narrator reminds us that “The world is not just made of bricks and mortar, but of minds. We can rebuild cities, paint beautiful facades, and invent new ways of living. We can protect all that we have. But, that place which we call home must be the place in which we are ourselves, with no façade, no foundations weak below us. Only then can we face outward, with our heads held high, playing the roles assigned to us, with open, honest hearts.”

As industry leaders, we all know the responsibility, but the reward of helping people see a brighter future is all the greater!

Tax Credit Reservation Received!!!
GGI is proud to announce that our Madison Palms development received a reservation of tax credits for the Nevada Housing Division’s 2016 round. The project also has an allocation of tax exempt bonds. This deal is structured using 9% and 4% tax credits, the first of its kind for Nevada!

Madison Palms site is located in North Las Vegas, and will consist of 126 units of affordability for seniors 55+ on a 5-acre infill site, set within a commercial shopping center. It represents an ideal location for senior housing, near medical and dental, retail, grocery shopping, veterinary hospital, post office, banking, restaurants, and public transportation, all immediately at hand. Within a quarter mile from the site is a public walking path that residents can enjoy for fitness and leisure. The public library is within 2 miles. Movie theatres and entertainment is within 3 miles.

Local merchants favored the project, as they will also benefit by these resident’s support of their stores and offices.

This will be an innovative project, and the City of North Las Vegas looks forward to having it in their area.

A division of the National Association of Home Builders, the 55+ Housing Industry Council is the voice of the Senior Housing industry and a leading source of information and research on the active adult, independent living, service-enriched and assisted living markets.

At its annual International Builder’s Show (IBS) held this year in Las Vegas, NV, the NAHB featured its annual “Best of 55+ Housing Awards”. We are pleased to announce that Madison Palms garnered a Silver Award for its category, “Affordable Rental Community—On The Boards”.

Affordable Housing Outlook 2016—The Challenges ahead
The last several years have seen a surge in rental demand, with 43 million families and individuals now living in rental housing across the country since mid-2015. This is up nearly 9 million from 2005, the largest gain in any decade recorded. The downturn in both the economy and the more recent renewal of the housing market fueled this statistic, extolling the benefits of renting.

Also, the aging of Millennials, those born from 1985-2004, has added to the number of renters, as Baby Boomers (ages 51-70) continue to downsize and rent rather than own.

But rental stock has not kept pace, the rental market has tightening, showing vacancy rates now at their lowest point, and rent prices rising at 3.5 % annually, the fastest pace in almost 30 years. This is creating a situation where the “cost-burdened” renter pays more than 30% of their income for housing, and in many cases the severely-burdened are paying as much as 50% of their earnings, rising from 7.5 million households in 2001 to over 11 million by 2014. This has set another record.

Seeing the need for more apartment development, and seizing the opportunity to build, many developers are erecting multifamily, yet renters find that due to higher construction costs, these units are not within reach. It’s nice to think that a more robust economy is allowing for more construction, but the tremendous need for affordable housing is not being filled. And, many renters who already live in apartments are seeing rents continually increasing, and having nowhere else to go, become cost-burdened. Interestingly enough, even households earning $30,000 to $44,999 now represent a cost-burdened group that has increased 37-48%, although their number was 10% in 2014.The situation for the severely cost-burdened has reached a critical point with the combination of higher rents and substandard housing.

The Low Income Housing Tax Credit (LIHTC) program, of course, still remains the primary means of expanding and preserving the affordable supply; that is why this program is so important. But the number of additional units produced through LIHTC is lagging behind the need.

So what is the answer? For one thing, policy makers need to consider the extent and form of housing assistance, but perhaps most importantly, they need to promote development of a wider range of option and in communities that offer quality schools and more job opportunities. Developers have had to be extremely creative in layering subsidies in order to do projects and keep rents affordable, but the complexity and requirements of these layered subsidies add costs. Yet, all level of government must capitalize on the capabilities of the private and non-profit sectors, listening to their experience “from the trenches”, so to speak.

It is just this creativity and vision that will enable the affordable housing industry to make the leap to the next level for the industry.

In the article entitled Focus On: Las Vegas, George Gekakis was asked for his comments on the current affordable housing scene in Las Vegas. 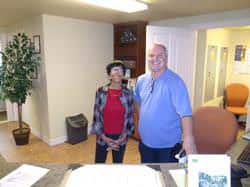 Through our non-profit organization, Silver State Housing, our properties offer opportunities for seniors to volunteer their time while gaining experience for potential employment in the general workplace, to brush up on their office skills in a friendly and helpful environment. AARP has been a helpful source for these seniors who want to work.

Now and again, volunteers seem to fit the bill for employment at our properties when openings occur. Such is the case with Greg Pike and Clarissa Milton who joined the staff at McKnight Senior Village. Greg works as a porter, dividing his time between McKnight and our Santa Barbara Palms. Clarissa trained for and is now employed as McKnight’s receptionist.

More recently, Joan Black did volunteer training at our Sonoma Palms, where she now holds its receptionist position. Lori Muehlhausen, Silver State Housing’s executive director states, “it’s great helping put people back to work, to see them actively engaged. It puts a smile on all our faces!”